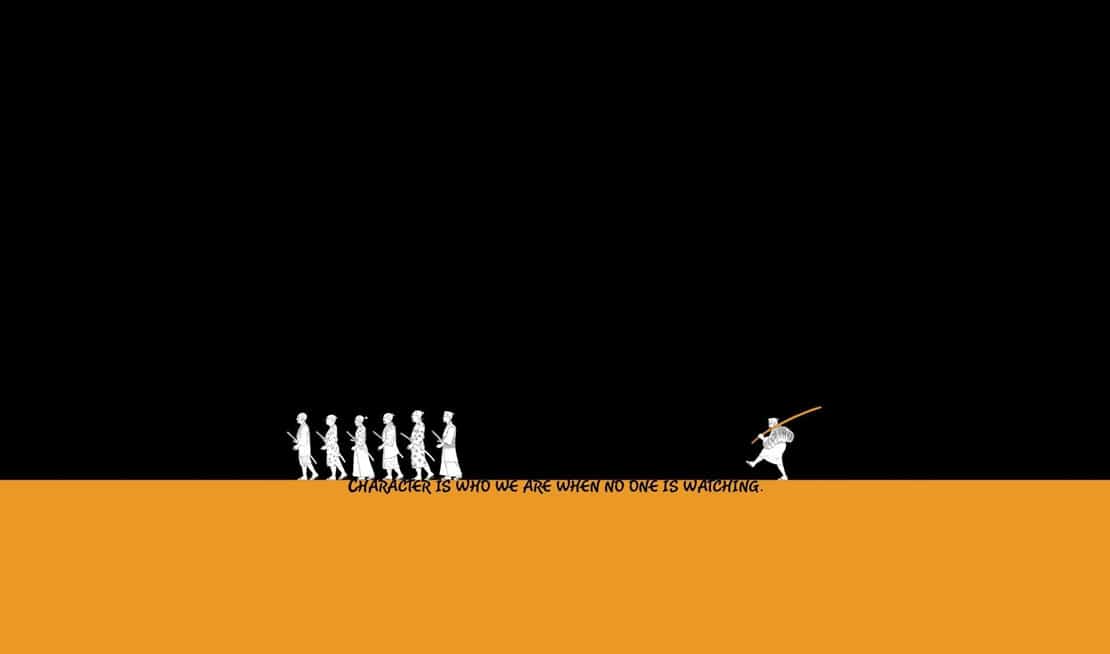 A famous Major League slugger was almost washed out in his first year because he tried to be someone else. The rookie started out hitting beautifully and soon led the league. Sports writers were singing his praises. Suddenly he went into a slump. His batting average dropped from .460 to .140. Days went by without him being able to get a scratch single. Finally, the manager benched him. Three days later the manager met with his coaches. He had to cut his roster and wanted their opinion. The manager had decided that the once sensational rookie should be sent down to the minors for further seasoning. One coach, a grizzled veteran, disagreed. “Let me have a few days with him,” the coach suggested. “Okay,” the manager assented. “Three days only.”

The coach, who had been a great hitter in his time, took the rookie aside. He told him to take a few swings of the bat. “Say,” the coach observed, “you cut at that ball just like Hank Aaron used to.” The youngster blushed. He admitted that Hank Aaron had been his boyhood hero. All through sandlot and high school baseball the rookie had tried to pattern his swing after that of Arron. It had worked wonderfully and actually carried him here to the Majors. And, here in the Big League, it worked, too—for a while. But now, once the pitchers figured out his weakness, he went into this slump.

“The trouble is,” the coach told him, “is that it really is still Hank Aaron’s stance and swing. You can never quite duplicate it and even if you could its doubtful if it would be exactly right for you.” The newcomer saw the point. For three days, the coach worked with him to develop a style of hitting that was his very own. On the fourth day, the coach told the manager, “You can put the rookie back in the line-up.” On his first day back the rookie got two doubles and a home-run out of four times at bat. The next day he hit another four bagger. That season he ended up with a batting average of 351, near the top of his league.

Be an Individual
I’ve known scores of salespeople who failed because they tried to be somebody else—Trying to be like other successful salespeople, their manager etc. This is a form of extended adolescence. This kind of salesperson has not matured into their own identity. It’s perfectly all right to have our heroes but we should not try to emulate them 100%.

They should serve as guideposts or examples of top behaviors in selling. Too many salespeople believe the way to success lies in copying others. This is nonsense. Outstanding business leaders today are individualists to a person. They reached their positions because they were not simply faces in the crowd. They stand out from a crowd. Do they strike you as being a reproduction of someone else?

Be A Leader
Who but a leader could have developed the idea of a fast food hamburger chain, thereby creating a new multi-billion dollar market all over the world? Credit this one to Ray Krock, of McDonalds. Also, there was Steve Jobs and Steve Wozniak, developing an easy to use computer, revolutionizing computing today. Krock was a milkshake machine salesman and Jobs and Woz sold illegal telephone “blue boxes.”
Every great idea was produced by leaders. This is especially true of selling.

A number of salespeople are too content and move in well-worn paths. They are full-time followers instead of the leaders they should be. They use methods that were old 10 years ago. For example, they tell the buyer that something is no problem knowing full well it is, or worse, knock the competition. Their presentations are taken from a book rather than developed on the basis of trial and observation.

Make no mistake about it; truly successful salespeople today are leaders, not followers. They are originators and as creative as an artist. They function like an orchestra conductor working with their client companies. Helping in everything from proper selection to turning to a clear solution. They also orchestrate the project through preparation, development, implementations, conclusion and delivery. When something is “off key” just like the master conductor it is their job to correct the problem.

Develop Your Talents
Being a leader is easy to say. But how, you may ask, does one acquire this quality? The answer is simply, using the talents you have. Each of us was endowed with certain abilities. The trick is to discover them, own them and use them. Too often a salesperson’s qualities lie dormant because they don’t even know they are there.

All of us are raw material when we go into selling. From that point on we undergo a honing process, a refinement. This should also be a period of discovery. Look at yourself carefully. Be honest in assessing yourself. If you’re like most people you will find in yourself some characteristics that could hurt you in the business world. But you should also turn up some facets that can be of invaluable help in your career.

For example, you may have an arresting, well-modulated voice. By all means develop this quality for use in your sales presentations. Perhaps you have a good head for thinking out of the box. Why not use this talent to excite prospects and customers?
You might have the ability to make people feel comfortable about themselves. By all means take advantage of this. Most customers make judgments by how they feel emotionally and here is your chance to really shine in this department.

The quality of merely being a good listener will help your selling. It’s surprising how many salespeople do not use this ability. If a buyer feels you are truly interested in, understand and empathetic to their problems, they will often translate this feeling into an order.

The only way to be yourself is to trade on the characteristics that are yours and yours alone.

Study Your Prospect
Copying other people’s sales techniques is harmful because it does not take into consideration the varieties of prospects and customers. The old saying that “one man’s meat is another man’s poison” applies here. Another salesperson’s techniques may be just fine for their customers but poison for yours. All customers aren’t cut from the same mold. Each must be handled and responded to differently. How much better it is to study each prospect or customer, discover their desires, strengths and weaknesses, and then relate to them accordingly. To blindly adapt another salesperson’s methods may be the surest way to disaster.

Look at it from the point of view of the customer. They don’t want every salesperson they talk to, to be a carbon copy of the one before them. Coming in asking quick qualifying questions, do a feature and benefit presentations and toss some 30 year old close technique at them. This will displease them for three reasons;

(1) they’ll feel insulted because these types of salespeople treat them in the same manner as if they were a machine.

(2) they want a little variety in their life too.

(3) they want to trust you and know you are credible.

How dull it is for a customer to see the same type of sales person, making the same promises, grab some specs to quote, ask few questions and fax them some numbers. What some customers need is the refreshing breeze. Why don’t you be it?

Are you convinced that being yourself is the best way?

Get a Free Consultation

At Sales Focus, Inc., we believe that success begins with transparent partnerships. Our proven S.O.L.D.™ process is the roadmap which helps develop not only our relationship with clients, but our partners relationships with their customers. Big business or small, our focus is your growth, and your growth is the only benchmark for success.