Sales are the lifeblood of your business, but you need more than a sales team to ensure sustainability. To make the sales you need to thrive in your industry, you need to make sales cost-effectively, and the requires a strategy.

What Is a Selling Strategy?

By definition, a strategy is “a plan of action or policy designed to achieve a major or overall aim.” So, a selling strategy is an intentional, well-thought-out approach to how you are going to get more clients, sell more products and encourage repeat buying and up-sales so that your company can get an edge on the competition and grow.

Obviously, selling strategies must be tailored to each business and each business’ unique goals. They may include: END_OF_DOCUMENT_TOKEN_TO_BE_REPLACED

A famous Major League slugger was almost washed out in his first year because he tried to be someone else. The rookie started out hitting beautifully and soon led the league. Sports writers were singing his praises. Suddenly he went into a slump. His batting average dropped from .460 to .140. Days went by without him being able to get a scratch single. Finally, the manager benched him. Three days later the manager met with his coaches. He had to cut his roster and wanted their opinion. The manager had decided that the once sensational rookie should be sent down to the minors for further seasoning. One coach, a grizzled veteran, disagreed. “Let me have a few days with him,” the coach suggested. “Okay,” the manager assented. “Three days only.”

The coach, who had been a great hitter in his time, took the rookie aside. He told him to take a few swings of the bat. “Say,” the coach observed, “you cut at that ball just like Hank Aaron used to.” The youngster blushed. He admitted that Hank Aaron had been his boyhood hero. All through sandlot and high school baseball the rookie had tried to pattern his swing after that of Arron. It had worked wonderfully and actually carried him here to the Majors. And, here in the Big League, it worked, too—for a while. But now, once the pitchers figured out his weakness, he went into this slump.

“The trouble is,” the coach told him, “is that it really is still Hank Aaron’s stance and swing. You can never quite duplicate it and even if you could its doubtful if it would be exactly right for you.” END_OF_DOCUMENT_TOKEN_TO_BE_REPLACED

The sales profession is a “people” profession: if you don’t like people, come not near!

In our contact with so many people we’re bound to come across some customers who are a challenge to get along with. Some salespeople would avoid transactions with challenging customers altogether, but they lose out on valuable business. There’s no reason for you to forfeit a potential sale; instead, use some understanding and thoughtful action to create an effective working relationship and close the sale.

The following are some tips for things to avoid – “don’ts” – when dealing with not-so-cooperative customers:

As we begin the change of seasons from summer to fall we feel the temperatures change and see the leaves changing on the trees and wildlife get ready to hibernate. It seems, too, that nature’s wardrobe is inversely related to ours: as the trees change and drop foliage, we add layers to stay warm.  With all of the change going on lately, have you stopped to think of what you might change to improve your sales?  This is a good time to take a break – maybe even take a nice long walk – and engage in a bit of self-reflection.

Dedicate the time now to take inventory of your strengths and weaknesses. Yes, we all have weaknesses (we are human), but instead of being ashamed of your downfalls, learn from them.  They can be a powerful tool in the reinvention of your sales self.

Look back at the past year, professionally.  What do you think you did right and where did you not succeed as you wanted?

On the positive side…

Did you have any END_OF_DOCUMENT_TOKEN_TO_BE_REPLACED

We’ve all had the painful experience of visiting a store – grocery, computer, shoe, hardware, clothing; you name it – and finding that the clerk or salesperson is clearly having a bad day. And it’s not just a bit of a bad day, it’s a baaaaaad day. I don’t know about you, but I’ve been known to make a graceful but hasty exit in cases like that, I just don’t like buying from people who don’t want to sell to me.

On the other hand, I’ve met salespeople whose energy and enthusiasm were so inspiring, I would have bought a square wheel from them. Attitude, you see, is everything. Now, I don’t want to discount knowledge, persistence, a great product, etc., but your attitude can certainly put a shine on everything else that goes into good sales. And it has a END_OF_DOCUMENT_TOKEN_TO_BE_REPLACED

If you’ve been in sales for any amount of time, you know at least one super-salesperson, and probably more. They’re the ones who could charm the weapons from Attila the Hun, who bring sunshine out of snowstorms, calm wild animals with a single glance, and always – we mean always – close sales. They have that je ne sais quoi that sits just beyond the reach of description or understanding. Well, maybe.

If you want to know what makes certain salespeople really great, read on. Here, the super-salesperson is demystified as we delineate the traits common to the species. Go ahead: read on, and consider how many of these traits you display and which you’d like to.

Outsourcing is a popular tool for many small businesses and start-ups. Whether your concern is with internet marketing, IT management, or even production, outsourcing is a great way to fill roles which are outside of your wheelhouse without having to commit the resources to employ a full-time staff member or team.

One type of outsourcing that is often overlooked is your sales department. Sales team outsourcing allows you to work with a sales consulting and marketing firm in order to develop a strategy that will be best to help your small business or startup grow.

Working with an outsourced sales manager, you can determine whether you should focus on inside sales and lead generating or if END_OF_DOCUMENT_TOKEN_TO_BE_REPLACED

Statistics show that 50% of companies operating in North America use contract sales forces in some way. And as companies adopt a hybrid sales format, the divide between the two sales formats, inside and outside, is slowing decreasing. This is known as cosourcing, and it allows your company to reap the benefits of both inside and outside sales. Here are some common myths about cosourcing.

When it comes to lead generation, many people don’t quite understand what it is or what it truly means. And despite the fact that Business2Community reports that outside sales reps are able to convert prospects into clients 40% of the time on average (compared to 18% by inside sales reps), it’s hard for any company to make sales without successfully and consistently generating leads. To do this effectively, here are some common myths about lead generation that could be slowing you down. 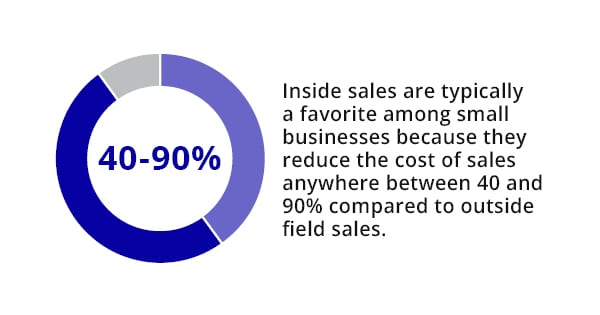 Consider each department of a business as a limb on the corporate body. Each is important to the life of the company. Sales, in particular, is critical to the business’ success.

A product may be the greatest of its time. It may be innovative, sleek, and wonderful. But if your business is unable to sell the product its significance is reduced to failure. Therefore, it’s key not only to determine where your sales department stands but also to determine what kind of sales work best with the vision of your company.

Inside sales
Inside sale services are defined as the selling of products over the phone and the Internet. Inside sales are typically a favorite among small businesses because they reduce the cost of sales anywhere between 40 and 90% compared to outside field sales.

While all businesses need to be careful where they invest their money, small businesses are particularly vulnerable economically END_OF_DOCUMENT_TOKEN_TO_BE_REPLACED